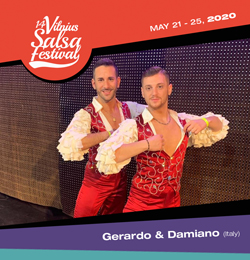 Their duo was born not long ago, and they made their debut at the Italian championship by winning the title of vice-champions, then continuing with the title of European vice-champions until the final of Pasos libers world championship in Spain.They are ambassadors in the world of Berardi Style, and go between the various international congresses also together with their group “Agua Company” with which they have won numerous titles of champions.Specialized in mambo, Cuban Style and Bachata. They love in body movements and found the Salsa with afro and rumba movement.