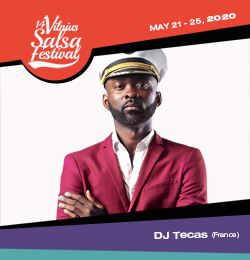 Mr. Tecas, was born in Angola and he has been related to music and dance since his childhood. He was raised in musicians family, where his education, rich in cultural values of his country, has been started. As a teenager, before coming to Europe, he began to practice Angolan folk dances and later started to deejay. At the age of 18, Tecas went to Portugal to continue his studies at the University of Coimbra, without forgetting his passion for music. After settling in France, he was spotted by events organizers who started to introduce Kizomba into France. It was a great pleasure for Tecas to express his musical personality by transmitting the values of angolian culture. The keywords for Tecas are joy and sharing. 4 years later in 2009, he created Kizomba.fr, the first Kizomba school in France, which offers regular lessons in Paris. He trained most of Semba teachers in Europe. He proudly represents his culture in various artistic and cultural events.